Remember, a puppy will need to relieve himself at least a dozen times a day and it's up to you to direct him as to where and when he does it. 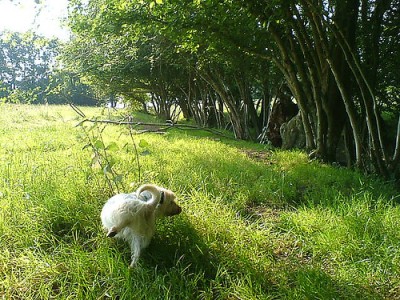 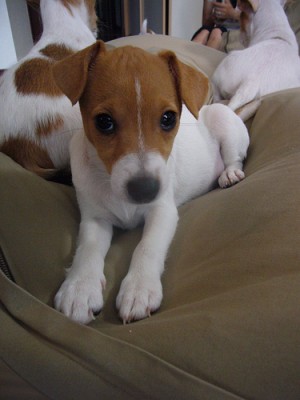 Teaching a new puppy how to be housebroken is the first training challenge an owner faces.

But Jack Russells are very intelligent and quick to understand.

With a little diligence on your part it shouldn't take so very long to create a Jack Russell Terrier housebreaking graduate and have your adorable new addition be perfectly house trained.

Right after meals the puppy should be taken outdoors to relieve himself.

Also, encourage him to use the same area each time.

Be certain to praise him when elimination takes place because this will encourage him to repeat this behavior after each meal. 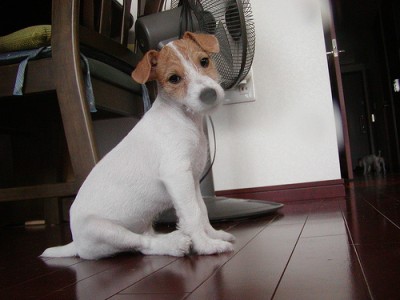 Praise is an Integral Part of Jack Russell Terrier Housebreaking.

It can be helpful if, from the start you use a command that the dog will always relate to this daily action...though it should be something not too graphic, as neighbors might not understand.

But make sure you don't use a command word that you use in any other way because, as you can imagine, THAT could be disastrous. 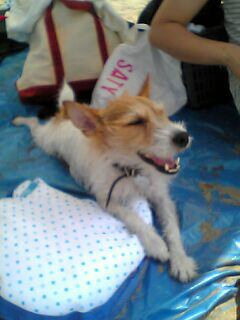 For instance, I say simply "Do It". And after years of hearing this same command day in and day out, my dog does his job without a second thought, and the difficult days of consistent Jack Russell Terrier housebreaking attention is a thing of the past.

But only use the command when he is in his area and you feel he is ready to eliminate, like after meals.

To put a puppy outside and hope for the best is really expecting too much even from this intelligent breed of dog. The more time an owner spends on Jack Russell Terrier housebreaking the sooner and more efficient the dog will understand.

In the first weeks he will not be able to make it through the night without needing to urinate. So be ready to go outside with him unless you opt to place newspapers down. This is the safest and easiest Jack Russell Terrier housebreaking tactic in that first month.

And you needn't be upset with him if, after he's been trying to get you up for the last 30 minutes, you find a puddle. At least he tried.

But be assured, when he's about three months old, and indeed, sometimes sooner, your precious puppy will be house trained.

With the right amount of these three P's, your dog will surprise you how quickly he learns to be a perfect graduate of good Jack Russell Terrier Housebreaking.

One popular method that works best for Jack Russell Terrier housebreaking during age 2 to 3 months is called paper training.  This is done in the bathroom or pen where the pups food is placed on one end of the area, and paper or absorbent pads on the other. The jack should be confined to this area and will quickly learn to defecate and pee on the pads/paper, and not where the food is served.  Once the pup becomes 3 months of age, the urination should be shifted to a spot outside the home.

Bring the Jack Russell puppy on a lead to the selected outdoor area. If helps if the Jack has selected this spot himself. Use a command such as "hurry up" as you only walk around the area to keep the dog focused.  The command will come to be associated with going to the bathroom. Stay still when your dog squats to go and when done, immediately provide praise.  A reward for going could be as simple as a short walk instead of going back inside the house.

If this doesnt' work after several days, then consider trying Crate Training.

If the above method does not work, confining a Jack Russell puppy to a crate or small area can help. A puppy will avoid going where it is confined. Keep the pup in the crate for about 10 minutes to 15 minutes and then bring outside. Repeat until the puppy urinates outside.

Gradually expand the area such as the kitchen. The key is to make sure that the dog is kept near any area it might urinate indoors.

Another approach is to put a lead on the puppy and tie it to your belt.  This way you'll always be nearby if the puppy needs to go.

If the puppy is anxious in the crate, consider confining the pup between trips outdoors to another area of the house.  Sometimes early experiences, such as in a pet store, forced the pup to urinate where it sleeps.  This behavior needs to be corrected.

We highly recommend the book Think Like Your Dog and Enjoy the Rewards (AFF) for additional tips on Jack Russell Terrier housebreaking and other behavior issues.  Some of the ideas on this page came directly from the book.  It's the best $10.00 investment you'll ever make in caring for your jack.

Have a Jack Russell Housebreaking Question or Suggestion?

Share your questions and tips about any Jack Russell housebreaking, behavior challenge or suggestions. Proper training and behavior modification is key to having a happy and successful relationship with your Jack. I will try to answer any questions as best I can. And of course we have thousands of readers who are always happy to help.

Or if you have an answer to any of the questions, it would be such a help to all seeking information about their beloved Jack Russell.

What Other Visitors Have Said

Click below to see contributions from other visitors to this page...

Reader Question: Training That Pees Outside But Poops Inside Hi, We have a Jack Russell/Miniature Rat Terrier mix. Her name is Meeko. She is 20 …

Using the bathroom in the house

Dog Pooping Accidents In Home Not rated yet
Reader Question: Dog Pooping in Home After Being Housebroken My Jack Russell Terrier is 5 years old and has recently began pooping inside on a regular …

Jack Russell Gets Nervous  Not rated yet
Reader Question: My neighbor has a 4lb small dog that barks and every time he barks, my dog gets very nervous and tries to hide in various areas. Normally …